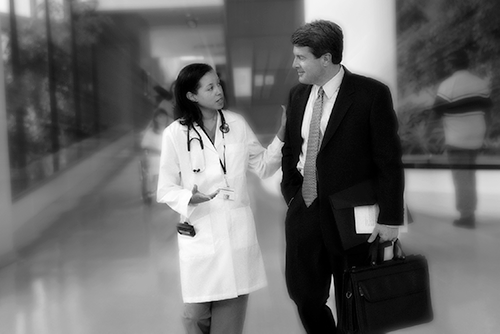 Over the years, medical groups have had numerous options when considering different transaction types, structures, and valuations. However, the actual kinds of partners that groups could consider participating in a transaction have expanded. As many practices have explored options with potential buyers other than hospitals, there has been a significant increase in the number of deals where practices are selling to private equity (PE) firms (or private equity-backed platform companies).

Such deals can often entail unique structures, terms, and outcomes. Thus, it is essential for those considering such transactions to be aware of and understand these various factors that can often be unique to private equity. Coker has published numerous pieces covering topics related to PE transactions with medical practices. In discussions with physicians and practice executives across the country, however, it became clear that we should take a step back and briefly consider an important and distinctive question related to this overall topic, which is “what exactly is private equity?”

The presence of private equity within the healthcare services industry is nothing new. Nevertheless, we recognize that “private equity” covers a rather broad term, which has likely resulted in some confusion around what people are talking about when referring to PE deals.

There are several monikers and categories of terms that people often use when referring to private equity. When denoting the general concept of private equity buyers, we hear phrases like investment banks, venture capital, hedge funds, investment funds, proprietary investors, merchant banks, institutional investors, and the like. Also, people reference transactions or firms involved in sales as private equity buyers, though, what they are talking about is a platform or operating company that is backed by private equity capital. Further, while there is a significant amount of overlap in many of these references, it is easy to see how one could be unsure of what exactly is happening in the overall discussion of private equity investors, specifically within the healthcare services arena.

In a simple explanation, PE firms are privately held (not publicly traded investment firms) entities that manage capital raised from institutional investors, which is deployed into targeted markets, sectors, and business segments. PE firms acquire companies that are typically also privately held. (While there are cases where PE investors will expand their investment profile to include the purchase of publicly traded securities and/or derivatives, this matter is beyond the scope of this discussion.)

The primary and often the singular goal with these investments is to grow the businesses in a firm’s portfolio through organic and non-organic (i.e., add-on acquisitions) means, thus increasing the value of those assets over a period. Further, while expanding value over time can be an attractive investment strategy in its own right, the real return of value on an investment for PE firms is through an exit. Generally, the two likely pathways are: 1) a liquidity event where portfolio assets are sold to another buyer; or, 2) a sale of such assets on the public market via an initial public offering (IPO) or similar vehicle. There are variations, so this is a general explanation of what ultimately happens in these types of transactions. This interpretation, however, covers the majority of what people are typically referring to when discussing PE investments, especially in entities such as medical practices.

Specifically, if one were to consider the most typical scenario of PE transactions with medical groups, it would go something like this:

A private equity firm–let’s call them “ABC Capital” –manages a pool of capital from various institutional investors. ABC’s focus is investing in healthcare services, and the firm’s leadership identifies medical practices as a primary opportunity for value in a market where there is ample room for growth. Also, there are plenty of eager buyers for a future liquidity event. ABC ultimately identifies a primary target in “AmeriMed,” which is a multi-specialty medical group consisting of 75 physicians across a particular geographic area of the U.S. that specializes in an effective mix of primary care and surgical sub-specialty medical services.

In a process consisting of significant time, effort, and compromise, which entails far more nuance extending beyond the scope of this extremely modest illustration, ABC ultimately closes on a transaction to acquire and operate AmeriMed. (If you would like to learn more about some of the structures, terms, and economic considerations involved in such a process, Coker has a wide range of material covering this subject and related matters.) At this point, AmeriMed serves as the initial investment in this space by ABC. Thus, this will be the “platform investment” on which ABC will ultimately attempt to build and expand its value within this specific arena.

Over the course of, let’s say, five to seven years, ABC will focus on two general objectives for this investment. First, they will bring in the necessary personnel, operational, and financial resources to maximize the efficiency and profitability of AmeriMed. Again, this description is almost laughable for what goes into this effort, but for a simple illustration, we will avoid going deep on what that process entails.

Simultaneously, ABC will work with the management in place at AmeriMed to identify, pursue, and eventually complete additional acquisitions of other attractive targets that can be incorporated into the platform. These add-on acquisitions are key to expanding the value, because optimizing the foundational entity and pursuing organic growth options can only go so far. Further, such organic growth typically takes more time to achieve significant benchmarks. However, by adding on other attractive entities to an efficient, well-functioning, and stable platform means that value is achieved in what can often be measured in exponential metrics, where acquired profits drop to the bottom line of the core entity almost overnight.

Fast-forward five or so years down the road after ABC and AmeriMed have stabilized the platform and added earnings value through add-on acquisitions, and, at this point, ABC is ready to explore how they can achieve the maximum value potential on their original investment. This juncture is where an exit or liquidity event comes into play, and ABC will consider its options. As mentioned, there are several different possibilities of how this exit could finally play out, but for the sake of this basic example, let’s assume that ABC will consider selling the entire enterprise to another buyer, or selling the asset on the open, public markets through an IPO. While IPO’s are not exactly rare, in the cases of PE-backed medical group entities, it is far more common for such assets to be sold to another party. And, again, there are many different factors to consider and understand as it relates to such types of scenarios. In keeping the example simple, however, we will assume that AmeriMed—now much larger and comprising greater value than it did when ABC first acquired it—is sold to another buyer.

Who would be a likely buyer of AmeriMed in a case like this? There are a few possibilities. It could be another PE firm, likely one that is larger than ABC and one that has existing assets in a similar space, where AmeriMed could be integrated with an existing platform. Also, other types of institutional investors might be interested in the space, including hedge funds or publicly traded investment firms. Similarly, but with distinctive nuance, a more strategic acquisition could occur, whereby AmeriMed is acquired by a large healthcare services entity that could integrate the company in an existing operation. We have even seen alternative types of strategic transactions happen where large hospital systems acquire such entities, integrating them within their established networks of medical services. Although there are many other potential possibilities, these are a few of the more common examples in the current marketplace.

While the above example is crude and admittedly far too generalized, it will help illustrate some of the more common characteristics of what occurs when we talk about private equity investors acting within the healthcare marketplace, specifically concerning deals with medical practices. There are various details and considerations within each of the key elements in the modest example, above. Coker has a wide range of content available to address many of these matters. Nonetheless, in considering the fundamental question around what people are really referring to when talking about private equity, this information is a starting point to a better understanding of this unique and growing component of the healthcare marketplace for those who might consider at some point the possibility of exploring opportunities with private equity.

Top Trends in Healthcare for 2023

Over recent years, we have considered top trends in healthcare for each prospective new With another year almost over,...

The presence of management services organizations (MSOs), entities that provide an array of administrative support...

The Role of Management Services in Private Equity Transactions

Private equity (PE) transactions have become of great interest throughout the healthcare While they have their specific...

Lao Tzu, the ancient philosopher, said, “If your happiness depends on money, you will never be happy with Why is it,...