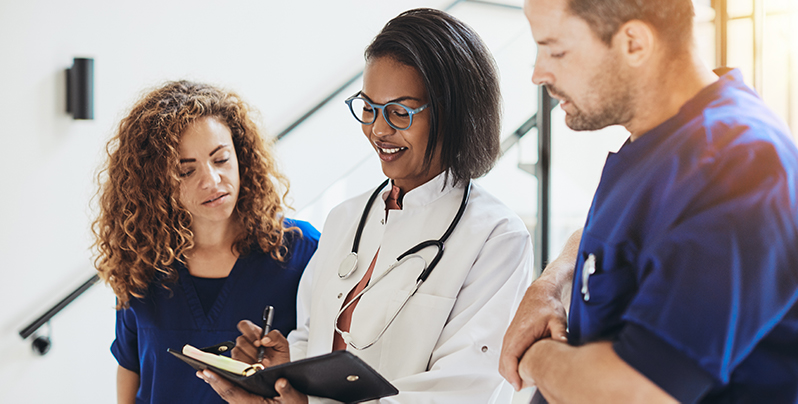 Professional services agreements (PSAs) continue to be one of our most frequently discussed alignment models, with both hospitals and practices seeking partnership and realizing there are countless ways to effectuate such through the use of a PSA.

PSAs are attractive to entities that wish to structure a contract that stops short of full employment yet still offers many benefits of a fully aligned relationship. Hence, we often refer to these structures as “employment lite.”

Since their onset approximately ten years ago, some concerns about PSA arrangements have existed. While there is still some misinformation relating to PSAs, they have become much more mainstream; lest we leave any stone unturned, let’s address some of these still existent misconceptions.

What are the common concerns about PSA arrangements that we commonly hear from physicians?

The most common concern from physicians against potential PSA alignment is that it is a gateway to an employment arrangement. Understandably, physicians view PSAs in this light. The Traditional PSA is especially considered a precursor to full employment (and often it is). However, the Global Payment PSA does not have the same potential for employment. In general, PSAs of any kind allow private practices the flexibility to remain independent, and physicians generally prefer it.

How do the most common types of PSA arrangements compare to employment?

The most common PSA arrangements entail either the Traditional or Global Payment PSA (GPPSA). We will provide a summary of each arrangement with visual illustrations. 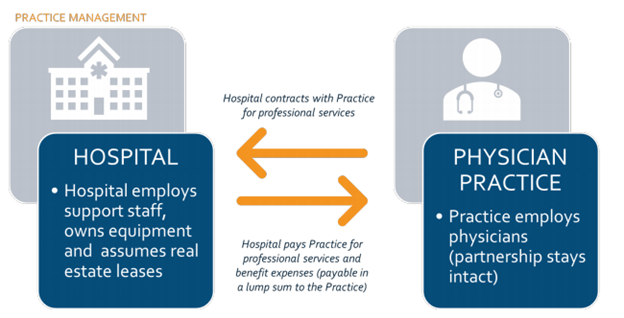 The hospital (or other partnering entity) assumes all responsibilities for practice management. The practice entity remains intact, and the physicians remain employees of that practice, with partnerships remaining intact, as applicable. They contract with the hospital or other partnering entity for professional services. Advanced practice providers may or may not stay employees of the practice.

The hospital controls the payer contracts, including negotiation and billing for all professional charges. The key to the Traditional PSA is that the hospital has responsibility for ongoing management of the business operations historically overseen by the practice, and the physicians do not. It mirrors employment significantly, stopping short of actually employing the physicians instead of contracting with them. 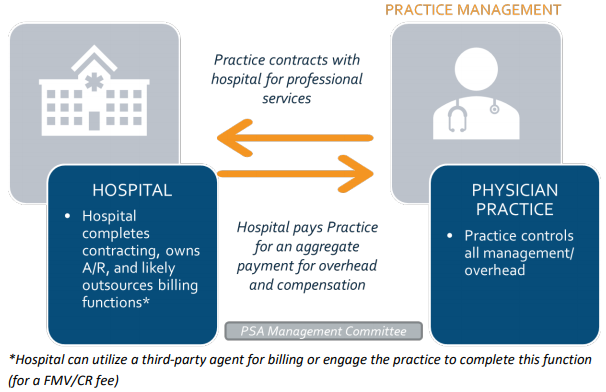 The GPPSA model emulates the practice as it existed before alignment. All physicians and staff remain employees of the practice, and the practice’s management continues in its pre-PSA form. The primary differentiator is the hospital or partnering entity is responsible for payer contract negotiations, billing, collections, and the entire revenue cycle instead of the practice.

The practice receives compensation for services provided based on established terms. These terms are primarily based on the physicians’ professional services, productivity-based principally (usually using wRVUs), and the potential for non-productivity-based incentives.

Under the GPPSA model, the practice also receives remuneration for its overhead, often on a budgeted dollar basis. Occasionally, the budgeted amount may consider variable expenses (usually based on a rate per wRVU). However, since the vast majority of practice overhead is essentially a fixed cost, the GPPSA typically reimburses the practice on a fixed (or budgeted) basis.

As an alternative, the contracting organization could use a total rate per RVU to reimburse the practice. However, this method has fallen out of favor in recent years; most arrangements now are based on a budgeted overhead reimbursement, with variable expenses reimbursed via a rate per wRVU.

In what situations does a Traditional PSA make the most sense?

In situations where a practice and a hospital or partnering entity are contemplating employment, a Traditional PSA may serve as a good test run before full employment. The parties determine their compatibility and ability to work while closely affiliated. For some physicians, the burden of practice management and administration weighs them down. Under a Traditional PSA, a practice will be freed of these burdens while still retaining its status as an entity. Also, often practices are unable to obtain favorable payer contracts. Under a Traditional PSA, the practice will indirectly leverage existing payer contracts that the hospital or partnering entity has in place.

Conversely, some physicians fear the loss of independence and autonomy that a Traditional PSA arrangement can bring. For these individuals, a GPPSA may be a better option.

In what situations does a Global Payment PSA make the most sense?

Not all practices desire an affiliation that closely resembles employment, such as a Traditional PSA. In these situations, practices usually prefer a GPPSA. Aligning via a GPPSA allows a practice to leverage a hospital or partnering entity’s payer rates while maintaining a considerable level of autonomy. From an operational perspective, the GPPSA results in an essentially unchanged practice from the pre-PSA form.

The GPPSA requires trust between the hospital and partnering entity and the physician group. While a GPPSA may also lead to full employment (or a Traditional PSA), we have seen these arrangements last well over a decade after several renewals and with no end in sight. If a practice desires the autonomy that a GPPSA affords while still leveraging a hospital or partner entity’s payer contracts along with the decreased stress that relinquishing the revenue stream to the contracting entity provides, a GPPSA is likely the right choice.

In summary, the misconception that a PSA must lead to full employment is patently false. There are ways for practices to align with hospitals or other entities while retaining as much or as little autonomy as they desire. The key is striking a balance between the needs of the practice and the needs of the hospital or partnering entity.

Often, negotiating between the two parties is when we initiate our assistance as objective consultants. We first assess the landscape of the potential affiliation. If agreed as best, we assist in the strategic and tactical development of the PSA arrangement to satisfy both the physician group and the contracting entity.

The Revival of Management Services Organizations as a Growth Strategy

E/M and ME: How will the 2021 E/M coding changes impact medical practices?

Much has been written about and discussed relative to the prospective impact of the 2021 changes to the Medicare...

PSA Progression: What’s Next in the Evolution of Professional Services Agreements?

Professional services agreements (PSAs) continue to be one of the most frequently discussed alignment models for Coker,...